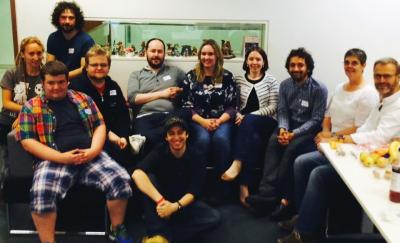 Volunteers from Design Informatics and Edinburgh tech communities taught 23 people to code an Android app as part of a Guinness World Record attempt for the most people learning to code on Saturday 13th June.

Edinburgh College of Art’s Centre for Design Informatics was one of 30 venues hosting the attempt to break the record for the largest number of people simultaneously learning to code an Android app. Over 1,000 people took part in the record attempt across the UK. The app-a-thon was organised by BCSWomen, part of BCS, The Chartered Institute for IT.

The event aimed to break the record, but also to encourage young people, particularly girls, to consider a career in IT. Currently, women account for just 16% of IT professionals; a figure that has fallen significantly in recent years.

Each appathon session was led by a woman who taught participants how to build Android apps using MIT AppInventor, with Edinburgh’s attempt led by Debbie Maxwell, from Design Informatics, ECA. One of the aims of the event was to encourage girls to consider a career in IT by demonstrating that women can and do IT. The sessions were a mixture of talks, activities and hands-on coding.

The attempt was organised and run by volunteers, helping out not only with programming queries but as official stewards, timekeepers and witnesses as required for the Guinness World Record attempt. Helpers came from the local business community as well as ECA, the University of Edinburgh and Edinburgh Napier University.