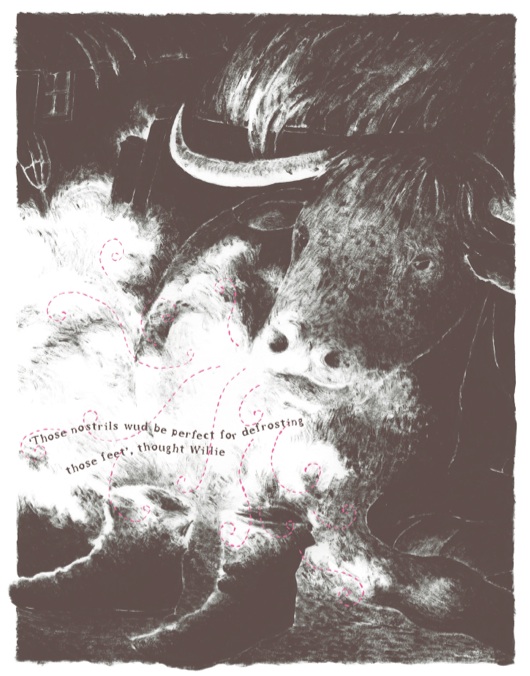 I need to document my last telling at the Better Crack Club in Glasgow on Friday.

My main reason for going was to meet up with a teller who was heading off to Dundee after the club, so I could interview them on the train back from Glasgow. I’d been to the Better Crack once before some months earlier so knew a couple of folk and the general feel of the club, but I hadn’t told a story there.

I’m not the kind of person who learns and learns and studies stories before telling them. I probably would if I was doing it as a real job, but as I only tell occasionally – when I feel I can’t get out of it! – I tend not to spend ages perfecting my stories. Because of this and because I don’t think I’m compelling as a teller, I choose very short stories. So, I read a story on Friday morning and it just appealed to me on some level. I took the book with me on the train from Perth and spent the hour long journey rereading it and trying to visualise the main characters clearly, picturing their expressions, the clothes they wore, the way they walked.

When I arrived in Glasgow, I met up with a friend in a bar nearby and spent a hour or two chatting with her over a couple of glasses of wine before we went to the teahouse, Tchai Ovna. As it happened I’d got the starting time wrong, so we were half an hour early and the first there. We settled into the best seats in the far corner of the room and debated which type of tea to order. The teahouse is a fantastic place to host storytelling. It’s in the university district but is very much off the main drag, tucked away down a side street with little in the way of signs to point out where it is. It’s only a small place, a single darkly lit room, crowded with benches and chairs. It serves only tea (although the twenty page tea menu is extensive) and some vegetarian food, all from a tiny kitchen barely big enough to fit two people. But it is very welcoming and relaxed, with low ceilings and nooks and crannies created by screens. A mix of odd half-broken chairs and sofas all surrounded by mismatched tables and lamps complete the look. I feel very jealous of the Better Crack Club’s venue. I would love to find a similar place in Dundee.

The last time I was at the club there was a mixture of songs, poetry and stories. The host went round everyone beforehand, writing down what they wanted to tell so there were no awkward pauses in between stories. They had a break halfway through too, which worked quite well. I came away thinking that one of the key elements of storytelling is environment. Our club can resemble an AA meeting at times. I’m researching alternative venues to hold our meetings in instead.

So my friend and I were steadily making our way through our respective pots of tea when folk from the club began to turn up. Fiona was hosting the evening this time and she asked me if I was going to tell a story. As luck would have it, it was a quiet evening. The teahouse was busy, but not with people willing to tell stories. So as usual, I made excuses, but said that I had a short, fairly unprepared story and if they didn’t have many names on the list then she could call me up. I duly wrote my name in the sparsely populated notebook, secretly hoping that she wouldn’t need to use me. I think one of the key components in storytelling is sharing. I don’t think you can just sit there and take each month without giving something in return, even more so because I’m involved in running it. But, and I always tend to say this (it’s my security blanket) I qualify before speaking. “I’m not a teller, I’m a listener. I’ve just been trying to learn this story today so bear with me.” Or something to that effect.

So anyway, Fiona was host, we started off with a group song and she told a story, then Mark told a couple before volunteering me as the next teller on the excuse that we would be leaving shortly to catch the train.
Everyone stands up to tell at the Better Crack club, so I stood up, fortified with wine and white tea, and began my qualifying speech. And then I told.

As I told something strange happened. I was in two worlds. I was in the story. I saw the queen appear in front of me, regal and dignified with a proud bearing. I saw the king, obstinate and disgruntled. And I saw the calf. As I told, the characters were with me, shadowy figures, brought alternately into focus and mist as I looked from them to my listeners. My listeners. For a brief spell of time they were mine.

They smiled as I described the calf with its huge, liquid brown eyes. They laughed when the calf got bigger and was still carried. And they smiled when the cow and queen were presented before the king.

After that, it went flat.

But no matter. I felt it, I finally understand what the teller gets out of it. I was a teller.

Of course, it remains to be seen whether I can do it again. And obviously, it might not have worked, maybe it was the wine and my vivid visual imagination, but perhaps it doesn’t matter if it was real or not – I felt that it was and so gained the experience.

More importantly, I want to tell the tale again, and try to get the ending right by setting up the beginning better. I never thought I’d want to tell a story more than once, but it wants to be told and I feel a particular resonance with it. I now believe and understand Jess saying that you have to love your characters, love your story and believe in them, otherwise there is no authentic story.